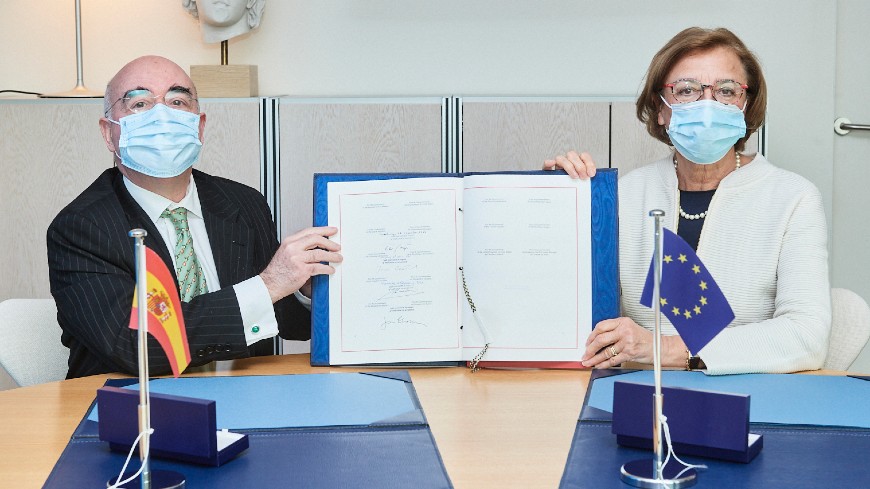 Manuel Montobbio, Ambassador Extraordinary and Plenipotentiary, Permanent Representative of Spain to the Council of Europe, signed today, in the presence of Gabriella Battaini-Dragoni, Deputy Secretary General of the Council of Europe, the Additional Protocol of 1995 providing for a system of collective complaints. This is an important step which requires the subsequent ratification of the Protocol or a declaration at the time of ratifying the revised Charter, a ratification process that is well under way in Spain.

“The signature of the collective complaints Protocol demonstrates Spain’s commitment to social rights and support for the European Social Charter system”, emphasised Gabriella Battaini-Dragoni. The Deputy Secretary General also applauded the timing, when the Charter celebrates its 60th anniversary (1961 – 2021) against a backdrop of discussions on improving the implementation of social rights in Europe and strengthening the Charter system.

The aim pursued with the introduction of the procedure in 1995 was to increase the effectiveness and the impact of the implementation of the Charter at national level. In addition, the collective complaints procedure has strengthened the role of social partners and non-governmental organisations by enabling them to apply under this opt-in procedure to the European Committee of Social Rights to examine compliance by States with the Charter provisions they have accepted.