One person's poverty should be a permanent concern for all 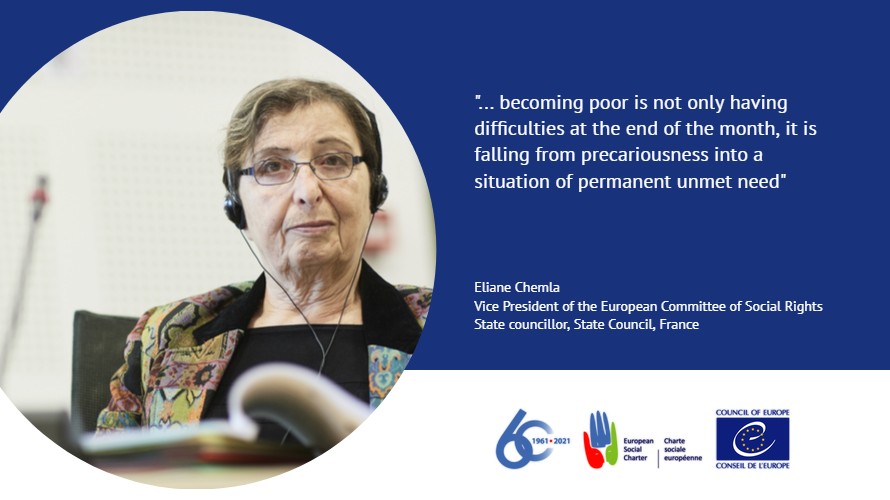 On this International Day for the Eradication of Poverty, 17 October, Eliane Chemla, Vice-President of the European Committee of Social Rights, sounds the alarm: "The most recent surveys are alarming: the health crisis caused by the pandemic has seriously affected the most vulnerable populations and a significant proportion has fallen into poverty".

According to charities, one million more have been affected in France and in Spain, according to a report by Philip Alston, former UN Special Rapporteur on extreme poverty and human rights, 26% of the population and 29% of children are now at risk of poverty and exclusion.

The Revised European Social Charter, and in particular Article 30, obliges States Parties to effectively protect individuals and families against poverty and social exclusion by taking effective and coordinated measures to promote effective access to, inter alia, housing and social assistance.

Only 19 member states of the Council of Europe have accepted Article 30 and of those that have committed themselves to implementing this article, not all are succeeding in fulfilling this commitment. However, these States, aware of the problem, have adopted action plans to this end, but the Committee could only note in its latest conclusions on Article 30 that the expected progress had not been made.

Poverty remains a serious issue and the improvement of the health situation alone will not be enough to overcome it.