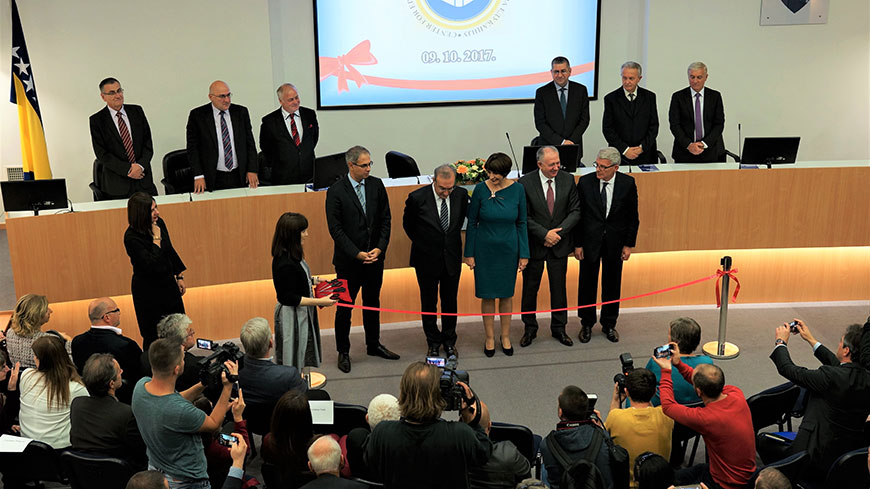 In an official ceremony, that took place on 9 October in Sarajevo, Šefik Džaferović, Deputy Chairman of the House of Representatives of the Parliamentary Assembly,  Irena Hadžiabdić, President of the BiH CEC, Haldun Koc, Ambassador of the Republic of Turkey and Drahoslav Štefánek, Head of Office, Council of Europe in BiH opened the new Education Centre of the Central Election Commission of BiH. Around 120 representatives from government, diplomatic corps, international organisations, media and civil society attended the event.

The centre was financed with state funds and a support of the Embassy of Turkey. Council of Europe contributed to the development of the strategic plan and curriculum for the centre through continuous expert support within its electoral assistance program to BiH.

The training venue has a capacity for 150 persons and counts with a conference room, four interpretation boxes and a media lounge and is connected directly with the premises of the CEC BiH. It will be used for capacity building activities of electoral stakeholders, namely trainers of commissioners and commissioners at all levels, domestic and party observers, candidates and media representatives. The centre will be functioning during and between election processes, following the logic of the election cycle. Additionally it will host press conferences and might be used for post-electoral events. The creation of an election library is planned for the future.

The training activities started already with a series of leadership and conflict management  trainings for 120 members and staff of CEC and MECs, imparted by the European Centre for Election Support (ECES) in October and will be followed by a joint training with CEC BiH and electoral stakeholders from India in November.

Members of the State Election Committee from Croatia, invited to the inauguration, showed their interest for the concept of the centre and possible joint capacity building events in the future.