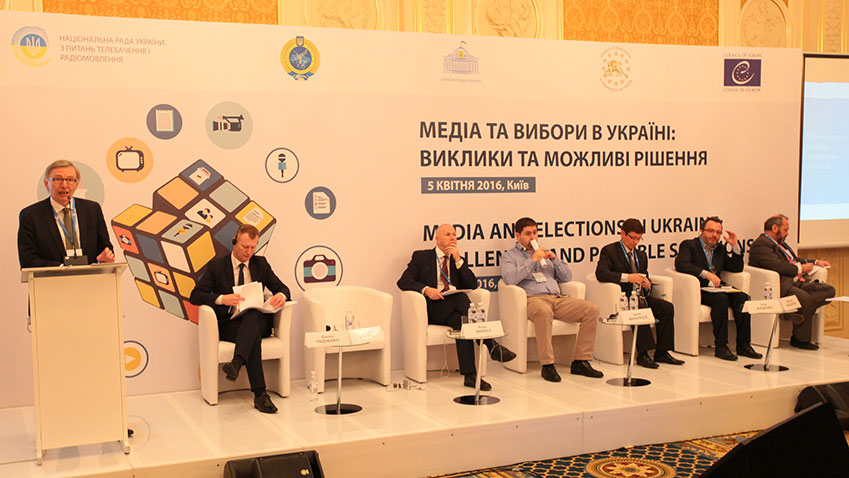 The Council of Europe in cooperation with the Parliament of Ukraine, the National Council of Ukraine on Television and Radio Broadcasting and the Central Election Commission of Ukraine organised an international conference "Media and elections in Ukraine: challenges and possible solutions". About 200 participants took part in the discussions, among them international experts, representatives of the Parliament, national and international media regulators, the Central Election Commission, representatives of the judiciary and governmental institutions, local authorities, NGOs and media community.

Ambassador Jan Tombiński, Head of the EU Delegation to Ukraine stated: “The current coalition didn’t keep the old promise to assess the electoral legislation immediately after the coalition has been formed as this was a part of coalition agreement. One of the first steps should be assessing the electoral law and responding to all recommendations and mistakes from the previous system. The role of the media should also be the fight against the vote buying, which is a huge illness of a democratic system. That people are not voting for their ideas, not because of their educated choice, but for getting something in exchange of the only act of putting the ballot in the box. The elections are much more than that, they are about shaping the future of the country». Also Ambassador Jan Tombiński said that the EU has been calling for years for a comprehensive Electoral Code, a set of rules which could  be used for different types of elections, with regard to financing of pre-election campaigns, transparency of funding, rules on dealing with breaches of electoral law and this should be an obligation of political parties.

Victoria Syumar, Member of the Parliament of Ukraine, Chair of the Ukrainian Parliamentary Committee on Freedom of Expression and Information Policy, noted that new electoral legislation should be the next step after implementation of the law on transparency of media ownership: "We have to prove that we are ready to reform electoral legislation because under the current system we lose the main thing - trust. The Parliament now is a body people trust least of all. I am convinced that the root of the problem lays in the non-public lists, isolation from the voters, from their will as well as in the irresponsibility for ideological position".

Mr. François Friederich, Head of the Division of Electoral Assistance and Census of the Council of Europe, said that “the Council of Europe as a standard setting body had recommendations for the member-states on measures concerning media coverage of election campaigns. These standards are based on key principles - non-interference by public authorities in the professional activity of journalists, protection against attacks, intimidation or other types of unlawful pressure on the media. Regulatory frameworks on media coverage of elections should respect the editorial independence of the media. Moreover, among the important principles are encouraging self-regulation as well as professional and ethical standards of the media, ensuring transparency of, and access to the media. The Council of Europe standards put a special emphasis on public service broadcasting, and equal access to its respective facilities for political parties during election campaigns. News coverage made by public broadcaster should be balanced and based on facts, including coverage of the activity of the public authorities in accordance to the best international practices”.

International experts of the Council of Europe Jacob Mollerup, editor and consultant, former president of The Organization of News Ombudsmen (Danmark), Peter Wardle, expert of the Venice Commission, former chief executive of the UK Electoral Commission, Bertrand Simon, professor of political and social communication at Political Science Department of the University Paris 1 Pantheon Sorbonne, Ivane Makharadze, Head of Broadcasting Regulation Department of the National Communications Commission of Georgia presented the experience of France, Denmark, USA, the UK and Georgia in ensuring balanced media coverage of elections.

The recommendations issued at the end of the conference will form the basis for future Council of Europe assistance in promoting free and fair coverage of elections.

The conference was organised with the support of three Council of Europe projects (Directorate General Human Rights and Rule of Law, Directorate General of Democracy and Venice Commission) “Strengthening Freedom of Media and Establishing a Public Broadcasting System in Ukraine”, “Reform of the Electoral Practice in Ukraine”, “Assistance to the Ukrainian authorities in reforming electoral legislation and in conducting constitutional reform”.