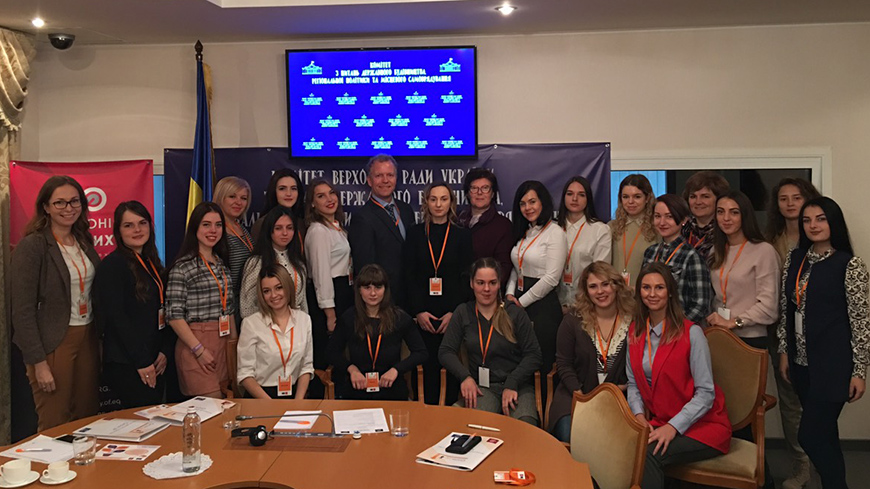 15 young women coming from 11 regions of Ukraine participated in Girls’ Leadership Academy “Grow UP” held on 12 – 14 November 2018 in Kyiv. Participants of the Academy were selected based on the results of the assessment of the ideas/projects which they had developed and suggested for the implementation in their respective local communities. Among the selected ideas/projects, there were projects related to ensuring voting rights of IDPs, increasing women political participation, ensuring human rights for people with disabilities, combatting corruption in education, developing and using energy-efficient and environment friendly technologies. Participants of the Academy represented different vulnerable groups of society, including IDPs, national minorities, people with disabilities, orphans, low-income families.

The programme of the Academy included lectures and workshops on electoral legislation for national and local elections, parliamentary rules of procedure and law making process, activities of local self-government bodies, and Council of Europe acquis on gender equality and standards on balanced participation of women and men in political and public decision making, project management and project implementation. Separate sessions of the Academy were dedicated to the developing and enhancing leadership and communication skills of young women.

Participants of the Girls’ Leadership Academy “Grow UP” have also been granted an opportunity to participate in the upcoming Second Ukrainian Women Congress to be held on 7 – 8 December 2018.

The Girls’ Leadership Academy “Grow UP” was organised by the Ukrainian NGO “Women’s protection league “Harmony of Equals” with the expert and financial support of the Council of Europe*.