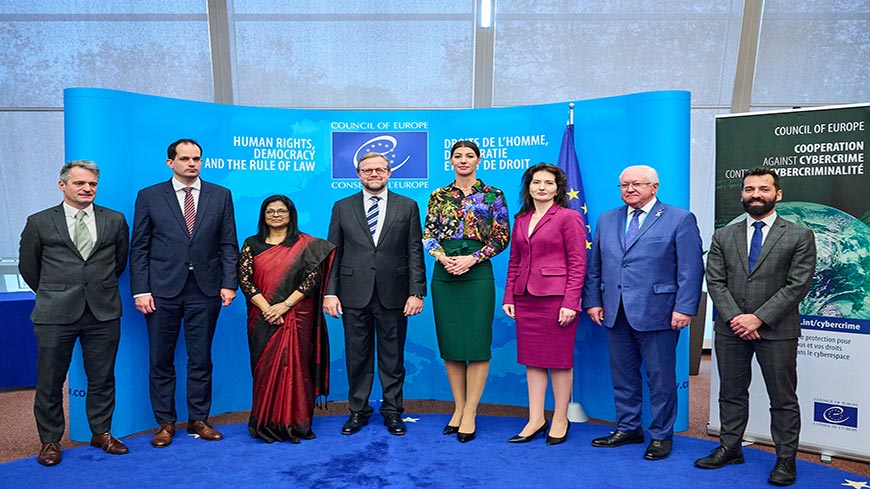 “Today, more and more of our time is spent online – this certainly exposes us to all sorts of information as well as disinformation, the good and the bad of the internet. It exposes us to cybercrime as well. Crime that regrettably is becoming more and more frequent, cunning and diverse”, highlighted Bjørn Berge while giving the opening address of the ceremony of signature of the Second Additional Protocol to the Cybercrime Convention held in Strasbourg on 30 November.

With six further states (Croatia, Republic of Moldova, Slovenia, Sri Lanka, Ukraine and the United Kingdom) signing this Protocol today, there are 30 signatories within six months after it was opened for signature in May 2022. “This is excellent progress in a short period of time on a very important part of our work”, Mr Berge stated. He also welcomed today’s accession by Brazil to the Cybercrime Convention, bringing its total number of States Parties to 68.

The ceremony was held within the margin of the 27th Plenary meeting of the Cybercrime Convention Committee.

On the photo (from left to right):

Mr Sandy Moss, Ambassador Extraordinary and Plenipotentiary, Permanent Representative of the United Kingdom to the Council of Europe

Ms Dominika Švarc Pipan, Minister of Justice of the Republic of Slovenia

Ms Daniela Cujba, Ambassador Extraordinary and Plenipotentiary, Permanent Representative of the Republic of Moldova to the Council of Europe

Mr Borys Tarasyuk, Ambassador Extraordinary and Plenipotentiary, Permanent Representative of Ukraine to the Council of Europe

Opening of the conference “The European Convention on Human Rights: its Application, Successes, Challenges and Opportunities”