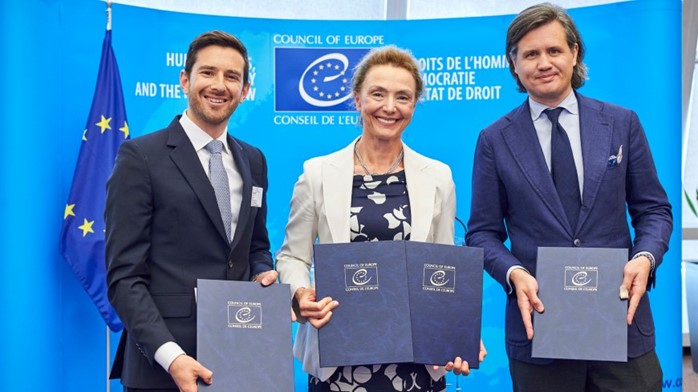 The International Chamber of Commerce and The LEGO Group have joined the Council of Europe’s Digital Partnership, an initiative aimed at fostering co-operation, with companies and their business associations to promote respect for human rights, democracy and the rule of law on the Internet.

During a signing ceremony in Strasbourg, Secretary General Marija Pejčinović Burić exchanged letters formalising their collaboration in the Partnership with Andrew Wilson, Global Policy Director of the International Chamber of Commerce and Edward Lewin, Vice-President of Government and Public Affairs of The LEGO Group. After the ceremony, the new partners held an exchange of views with delegations of the 46 Council of Europe member states participating in a meeting of the Committee of Ministers Thematic Coordinator on Information Policy.

Since its launch in 2016, in the framework of the Digital Partnership, 27 companies and business associations have been invited to join Council of Europe activities related to the fight against cybercrime, data protection, artificial intelligence, freedom of expression, promotion of equality and non-discrimination, education and the protection of children.

With the Second Additional Protocol to the Convention on Cybercrime being now open for signature by countries, new tools for enhanced co-operation and disclosure of electronic evidence are available, such as direct co-operation with service providers and registrars, effective means to obtain subscriber information and traffic data, immediate co-operation in emergencies or joint investigations, all subject to a system of human rights and rule of law, including data protection safeguards.

“The Second Additional Protocol provides the tools to deal more effectively with cybercrime and other offences involving electronic evidence. These tools will help protect society and individuals against crime, help victims obtain justice, and strengthen the rule of law. These tools are backed up by a strong system of safeguards, including for the protection of personal data. With these tools, the Internet can remain free, open and global, and sufficiently secure at the same time. With this Protocol the mechanism of the Convention on Cybercrime – the Convention with its Protocols, the Cybercrime Convention Committee (T-CY), and capacity building by C-PROC – will remain the most relevant international framework for a criminal justice response to cybercrime for many years to come,” said Alexander Seger, Head of the Cybercrime Division, during the international conference organised on the occasion of the opening for signature of the new Protocol.

Council of Europe: Speech by the Secretary General

Council of Europe: Second Additional Protocol to the Convention on Cybercrime (dedicated webpage)