Switzerland: Via Francigena travels along the Swiss path 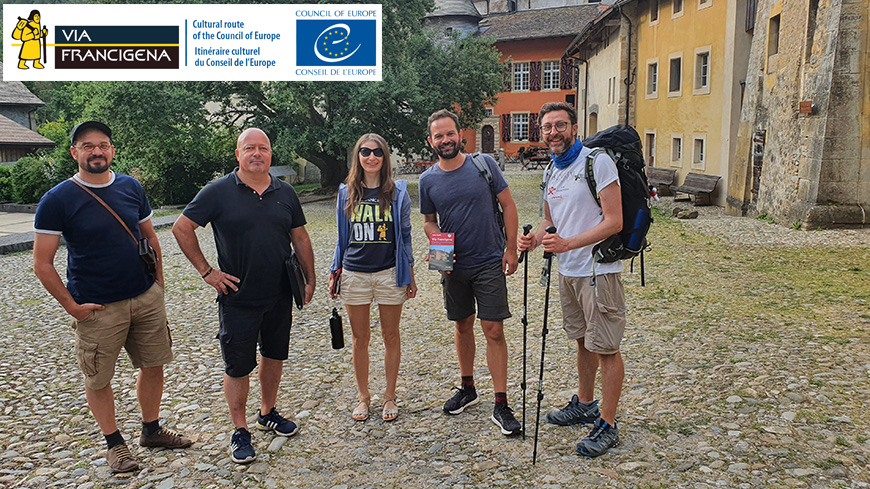 On 27 July, Mr. Julien VUILLEUMIER, the representative of Switzerland (Swiss Federal Office of Culture) in the Governing Board of the Enlarged Partial Agreement on Cultural Routes of the Council of Europe (EPA) and member of the EPA Governing Board Bureau, joined the trip along the Swiss path of Via Francigena, between Romainmôtier and Cossonay (Canton of Vaud).

Mr. Luca BRUSCHI, EAVF Director, and Elena DUBININA, EAVF International Relations advisor, conducted four meetings with political representatives of the EAVF members, which greatly reinforced the network, facilitated the best practice exchange and enhanced the membership benefits. Eight meetings with tourism offices along the Via Francigena were held during the walking trip and provided an opportunity to discuss strategies for common promotion of the route and pilgrims’ accommodations in Switzerland.

Member State of the Enlarged Partial Agreement on Cultural Routes of the Council of Europe (EPA) since 2013, Switzerland is crossed by 11 of the 38 certified Cultural Routes of the Council of Europe: Via Francigena, European Mozart Ways, Cluniac Sites in Europe, European Route of Cistercian Abbeys, Huguenot and Waldesian Trail, Réseau Art Nouveau Network, Via Hasburg, Via Charlemagne, European Route of Industrial Heritage, Le Corbusier Destinations: Architectural Promenades and Routes of Reformation.