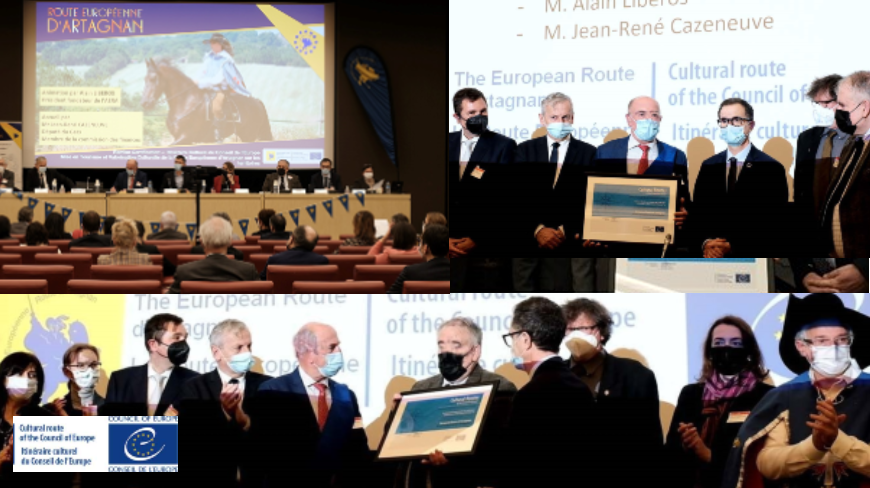 The meeting was opened by the Deputy of Gers, Mr. Jean-René CAZENEUVE, who welcomed about a hundred representatives of the 60 departments and provinces, the 17 regions and the 172 high historic sites located along the Route to exchange information on the development and cultural valorization of the European Route d'Artagnan.

On this special occasion, the certification "Cultural Route of the Council of Europe” was awarded to Mr. Alain LIBÉROS, President and Founder of the European Association of the Route d'Artagnan, on behalf of the Secretary General of the Council of Europe by Mr. Stefano DOMINIONI, Executive Secretary of the EPA and Director of the European Institute of Cultural Routes; and on behalf of the EPA by Mr. Bruno FAVEL, Representative of France to the EPA and Head of the Heritage Mission at the Ministry of Culture of France.

The European Route d’Artagnan is a physical and linear hiking itinerary built around six thematic routes established over 6,000 km and crossing six countries. These Routes allow the discovery of the heritage linked to d'Artagnan in a spirit of slow, sustainable and responsible tourism.

“The European Route d'Artagnan is perfectly in line with the values of the Cultural Routes of the Council of Europe Programme, demonstrating that travel promotes the discovery of others through dialogue and cross-border cultural cooperation”, emphasized Mr. DOMINIONI.

The ceremony showed the ever growing interest for the tourist development of the currently 32 Cultural Routes of the Council of Europe that cross France.