In order to implement the above mentioned objectives the Council of Europe has commenced the implementation of the Programme “Towards Strengthened Democratic Governance in the Southern Mediterranean (South Programme II)”, building on the outcomes and achievements of the 1st phase of the South Programme  implemented  in 2012-2014. The geographical scope of the Programme covers cooperation  with  countries  of  the  Middle  East  and  North  Africa  (MENA)  region,  but  in  particular Tunisia, Morocco and Jordan, who will act as the main beneficiaries.

The Programme serves as the overarching framework  for  Council of Europe  cooperation  with Morocco in  the following three priority  areas:  i)  human  rights;  ii)  rule  of law and  iii)  democracy. The “rule of law” area includes a significant component on “Combating corruption and money laundering”, which will be implemented as one of the Programme’s components in the form of a separate Project.

Capacity building on financial forensics for the Moroccan police

The South Neighbourhood Anti-Corruption Project (SNAC 2) held a two-day training on financial forensics in for specialized units of the Moroccan Police. In the course of these two days, some 19 participants representing the General Directorate of National Security (DGSN) and the Moroccan... 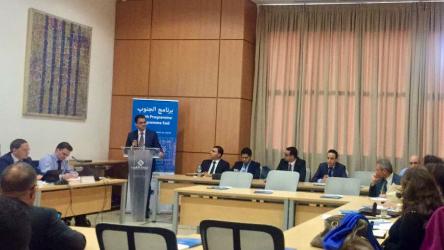 On 12 April 2017, the Council of Europe, in cooperation with the Moroccan Anti-Corruption Authority (ICPC), the FIU (UTRF) and the Central Bank (Bank Al-Maghrib) organised a workshop on preventing and identifying money-laundering of proceeds of corruption. The workshop participants discussed best...

Increasing capacities of the Moroccan FIU to detect corruption-related transactions