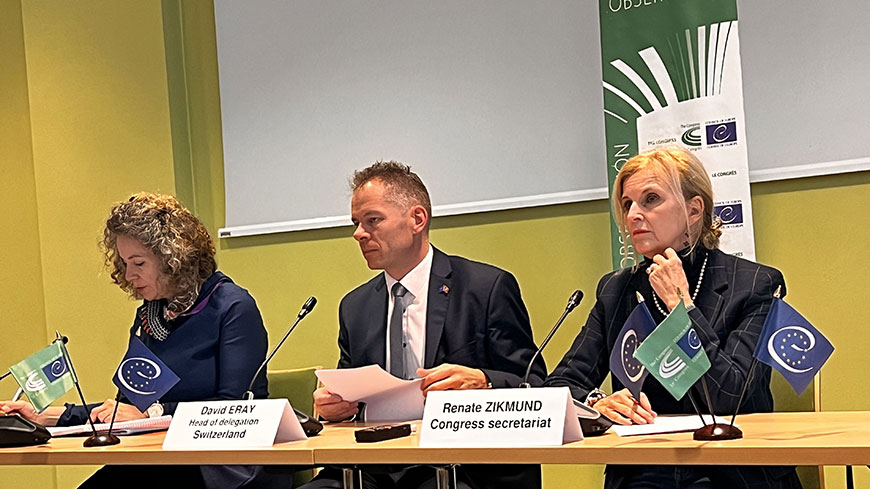 A delegation from the Congress of Local and Regional Authorities of the Council of Europe, made up of 18 participants, carried out an observation mission of the local elections held on 20 November 2022 in Slovenia. The observers were deployed to different regions of the country, in order to follow the electoral procedures in 120 polling stations, including the counting in 7 polling places.

"Overall, we witnessed a calm and orderly Election Day, without major incidents or anomalies," said the Head of the delegation, David Eray (Switzerland, EPP/CCE), at a press conference in Ljubljana, on 21 November. He highlighted the high level of confidence in the Slovenian electoral system, both on the part of voters and candidates, as well as the existence of special voting rights for the country's three ethnic minorities, "which is an important feature of a truly democratic and inclusive environment”.

“We also believe that reflection should be undertaken in Slovenia to reconsider the terms of mayors and reduce the number of consecutive terms to two, as is also the case in some other European countries. The fact that Slovenian mayors, once elected, are very difficult to be challenged by new competitors, is not conducive to democratic change," stressed the Head of delegation, underlining a risk of accumulation of power, lack of transparency and disengagement of the younger generation from politics.

On campaign finance, Mr Eray called for a review of regulations regarding the existing low spending limits for campaigns to prevent candidates from turning to creative ways to raise donations for their campaigns. Furthermore, he welcomed the election of a woman to the presidency of Slovenia for the first time, while recalling that progress remains to be made with regard to the involvement of women at local level, as women only make up around 10% of elected mayors.