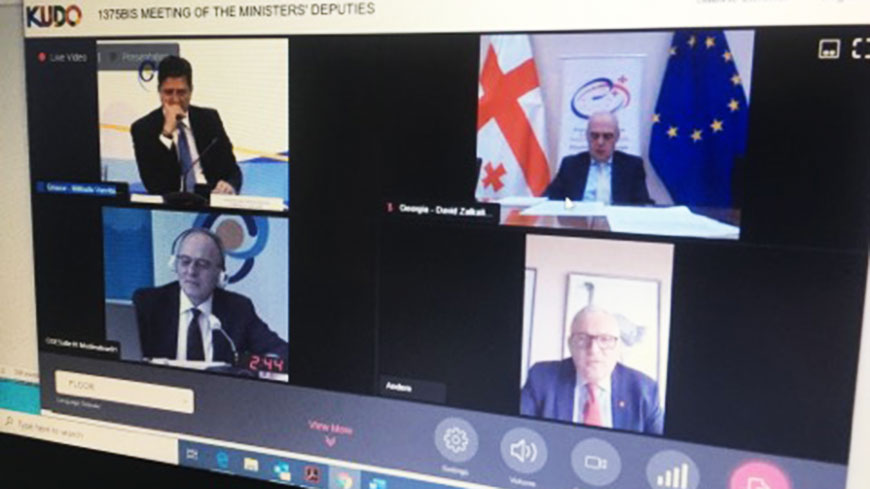 The President of the Congress congratulated the outgoing Chairmanship of Georgia for the work done and ensured the Greek chairmanship that the Congress was standing ready to actively participate in the upcoming work of the Committee of Ministers and to bring its contribution to the Ministerial Session in Athens in November 2020.

The new Chairman of the Committee of Ministers, Miltiadis Varvitsiotis, Alternate Minister for Foreign Affairs of Greece, outlined the priorities of the Greek Chairmanship for the next six months. These relate to “Protection of human life and public health in the context of a pandemic – Effectively responding to a sanitary crisis in full respect for human rights and the principles of democracy and the rule of law”.

Anders Knape underlined the essential role of local and regional authorities in the face of the COVID-19 crisis: “They are at the frontline to provide emergency services in their communities and take measures to contain the spread of disease. Not just the operational share but also a large part of the financial share of the burden lies on their shoulders” he said. He highlighted that local and regional authorities will also be key actors in bolstering economic recovery of the countries in the aftermath of the crisis.

President Knape also stressed the need to ensure that the measures taken in situation of crisis did not undermine the founding values of Europe in accordance with the guidelines addressed by the Secretary General of the Council of Europe to governments.

He presented the forthcoming work of the Congress on issues related to the functioning of local and regional democracy in times of crisis. Thematic debates will be organised in its committees and during its plenary session in October 2020, in particular on the postponement of local elections, the protection of vulnerable groups, the safeguarding of the European Charter of Local Self-Government and the management of temporary changes in the distribution of competences.

" The priority in the coming months for all levels of government is to join forces in order to overcome the crisis, help the people and prepare for the COVID-19 aftermath," stressed the Congress President. "In this regard, more than ever since 1949, Europe needs the Council of Europe as watchdog for democracy, human rights and the rule of law. And these are implemented and delivered in concrete terms to the citizens by the municipalities, cities and regions,” he concluded.