Nils Muižnieks was elected Commissioner for Human Rights on 24 January 2012 by the Parliamentary Assembly and took up his position on 1 April 2012. He is the third Commissioner, succeeding Thomas Hammarberg (2006-2012) and Alvaro Gil-Robles (1999-2006). 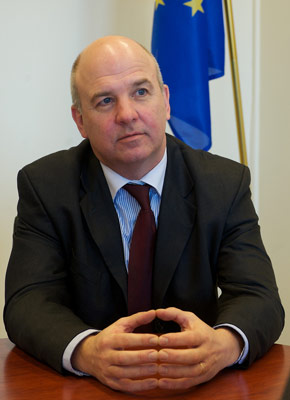 Human rights have been a pillar of European construction, inspiring cooperation between countries and people. However, all too often implementation has lagged behind standard setting, lofty words have not always been matched by concrete action to the benefit of human rights. In order to fulfil Europe's promise, it is necessary to address systemic shortcomings in member states and to establish sustainable human rights centred policies at national and local level.

As Commissioner for Human Rights, I intend to build on the work done so far towards the achievement of this objective. Closeness to people and the situation "on the ground" will characterise my approach, as will a constructive, ongoing dialogue with national authorities and intense cooperation with national human rights structures and human rights defenders. Only by working together can we make human rights a reality for all.

Particular attention should be paid to the most vulnerable groups of people, such as children, the elderly and persons with disabilities. More resolute commitment is also needed to promoting and protecting the human rights of women, minorities and migrants. New challenges, such as those arising from a rapidly evolving information society, require a balanced approach which protects human dignity, fundamental freedoms, and promotes mutual understanding.

In this era of austerity and uncertainty, a renewed commitment to human rights principles is badly needed. It is my intention to keep human rights high on the agenda of European countries and to contribute to the development of more humane policies benefiting both present and future generations.