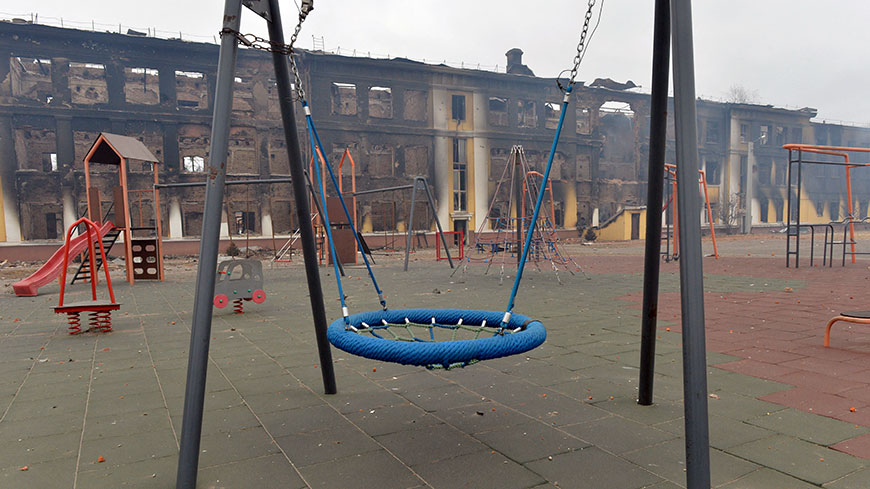 View of a school destroyed as a result of fighting in the Ukrainian city of Kharkiv, located some 50 km from Ukrainian-Russian border, on February 28, 2022. © Sergey BOBOK / AFP

“For the sixth day now, Russia's military attack against Ukraine has continued to sow death and destruction in the heart of Europe. In just a few days, the war has led to the death or injury of hundreds of people, including many children. The latest shelling of the city of Kharkiv has laid bare the Russian forces’ blatant disregard for civilian life, with dozens of people killed and injured and many civilian targets, including apartment blocks and a kindergarten, struck by unguided missiles and suspected cluster munitions.

This war tramples on international law and human rights and obliterates humanitarian law. Millions of people fear for their lives under the indiscriminate shelling that has struck hospitals, schools and homes. Thousands have been cut off from basic facilities, and lack access to water, medication, food, electricity, sanitation and shelter. Hospital workers struggle to provide care, forced by frequent shelling to relocate their patients to bomb shelters or basements. Streams of refugees and displaced people desperately seek safety.

This carnage must be ended immediately before even more innocent lives are lost and more damage is done. The Russian authorities can do this. They must immediately stop this nightmare.