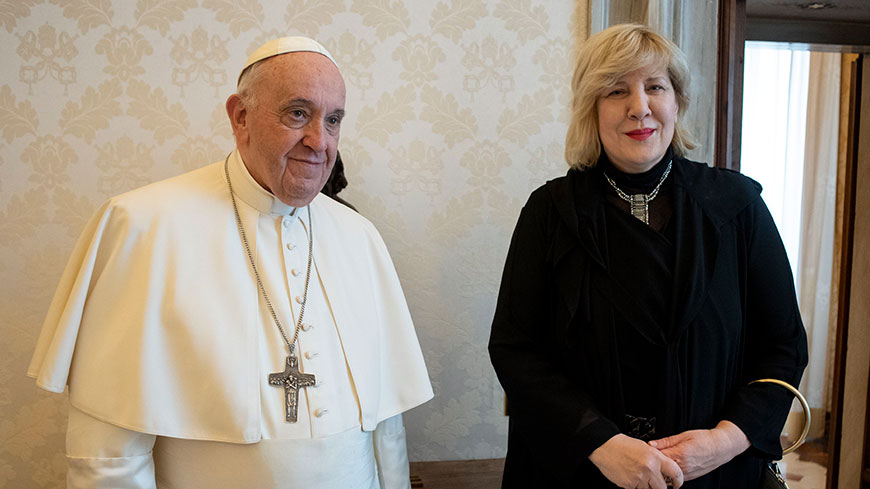 Today the Council of Europe Commissioner for Human Rights, Dunja Mijatović, met with His Holiness Pope Francis during a private Audience held in the Vatican City. The Commissioner highlighted her main concerns relating to the erosion in the protection of the human rights of migrants, asylum-seekers and refugees in Europe and to the need to strengthen the response to the humanitarian and human rights consequences of the war in Ukraine.

“When the human rights of those most vulnerable, including persons trying to escape armed conflict or poverty, are disregarded, immense injustice and human suffering occur”, said the Commissioner. “In these troubled times, when human rights are all too often violated with impunity, it is crucial to persevere in demanding states to adhere to norms established to safeguard peace, freedoms and the equal dignity of all human beings. I appreciate the Holy Father’s relentless engagement to promote and defend these universal human values. His role is crucial to advance human rights protection”.

The Commissioner also met with the Secretary of State, His Eminence Cardinal Pietro Parolin, and the Prefect ad interim of the Dicastery for Promoting Integral Human Development, His Eminence Cardinal Michael Czerny. Discussions focused on the need to improve the protection of migrants in Europe and humanitarian assistance to people internally displaced by the war in Ukraine or fleeing abroad, as well as on the need to strengthen human rights education and intercultural dialogue to prevent tensions, in particular in the Balkans.