Commissioner Mijatović intervenes in the infringement proceedings before the European Court of Human Rights in the case of Osman Kavala v. Turkey 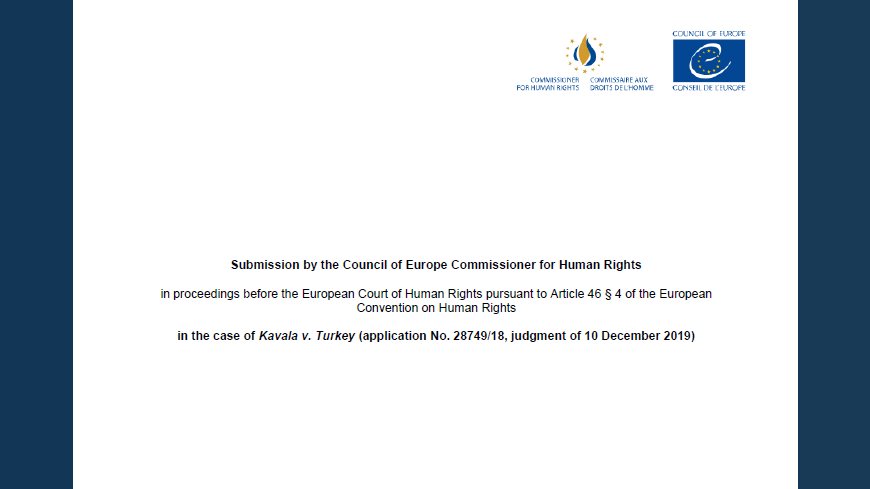 Today the Council of Europe Commissioner for Human Rights published her written comments, submitted on 6 April 2022 to the European Court of Human Rights, in the infringement proceedings in the case of Osman Kavala v. Turkey. These proceedings concern the question referred to the Court by the Council of Europe Committee of Ministers as to whether Turkey has failed to implement the judgment in this case. The case concerns the arrest and detention of a civil society activist and human rights defender in Turkey, as well as the allegation that this detention was used for purposes other than those prescribed in the European Convention on Human Rights.

Based on her extensive work in this context, in particular her third party intervention of 20 December 2018 before the Court in this case and the submission to the Committee of Ministers in the context of the Committee’s supervision of the execution of the judgement, the written comments provide the Commissioner’s observations on the implementation by Turkey of individual measures relating to the applicant’s detention. They also address the broader legal and political context prevailing in Turkey, which the Commissioner finds crucially important for assessing whether Turkey has acted in good faith and in a manner compatible with the “conclusions and spirit” of the judgment.  Having considered the ongoing detention on remand of the applicant and the pursuit of criminal proceedings against him as a seamless extension and continuation of the violations found in the Court’s judgement, the Commissioner concludes that by not releasing the applicant from detention, the authorities failed to abide by the Court’s judgement.