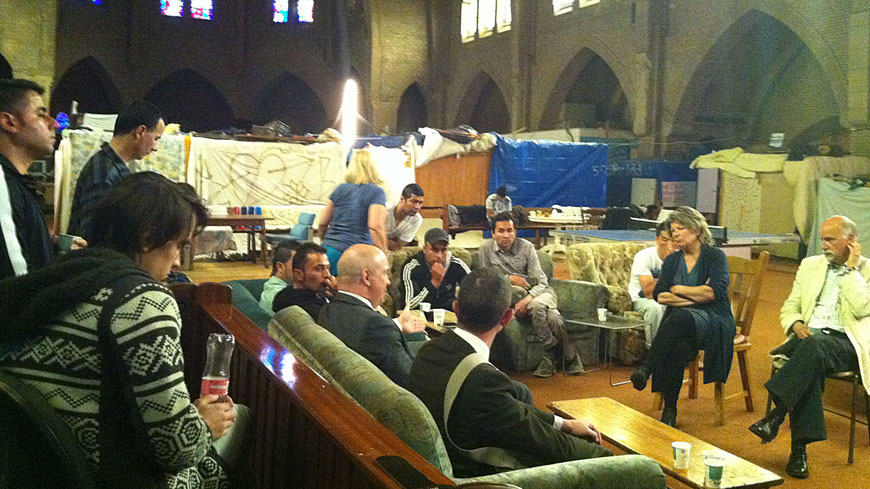 In some countries, they call them “invisible persons”, in others – “ghosts”. Throughout Europe there are many migrants, primarily rejected asylum seekers, who live in a state of protracted legal and social limbo without any long-term prospects. The authorities refuse to regularize them or to grant them any kind of legal status, but often, they cannot go back to their countries of origin for various reasons, most often, fear of persecution. These desperate persons tend to live in substandard conditions, completely excluded from society, lacking residence permits and the means to meet basic needs such as shelter, food, health or education. In essence, they are deprived of any opportunity to live in dignity.

During my visits I have met some of these persons and was struck by their plight. For example, when in Denmark in 2013, I visited an asylum center whose long-term residents were mainly rejected asylum seekers whose deportation order could not be implemented, due to a lack of identity documents or other reasons. 29 persons resided there for more than 15 years. During my visit to Cyprus in 2015 I was struck by the situation of 67 refugees and rejected asylum seekers, mostly Kurds from Iraq and Syria, as well as from Sudan and Ethiopia, who have lived in a UK military base for almost 18 years. Neither Cyprus nor the UK has granted them any long-term residency status. In 2014 in the Netherlands I was deeply concerned seeing migrants in a disused church living in extremely difficult conditions. Some of them had been placed in detention several times for several months without this detention resulting in deportation. Similar cases can be found in other European countries. The increased arrival of migrants, including asylum seekers, in Europe has exacerbated this problem.

Some countries routinely detain migrants, including asylum seekers, often in grim conditions, including in prisons where they are held together with criminal law detainees. I have noted the criticism expressed recently by several Spanish NGOs and politicians, following protests in a migrant detention centre in Madrid, who stressed that conditions in ‘immigrant internment centres’ were a shame for their society and it was time to close them.

As concerns deportation to the country of origin, issues may arise under the European Convention on Human Rights (ECHR) where there are substantial grounds for believing that the person concerned, if deported, would face a real risk of being subjected to inhuman or degrading treatment or punishment. In these cases Article 3 ECHR implies an obligation not to deport the person in question to that country. Furthermore, in light of the Strasbourg Court’s recent case-law  (B.A.C. v. Greece), the right to respect for one’s private and family life may be legitimately invoked by migrants, including asylum seekers, living in limbo. In the aforementioned case the Court found that Greece violated the asylum seeking applicant’s right to respect for his private life due to the authorities’ failure to decide upon his asylum application for 12 years, thus leaving him in an extremely precarious situation throughout the period in question.

Studies have shown that such situations, characterized by prolonged uncertainty about one’s fate and lack of contacts with the outside world, adversely affect migrants’ physical and mental health. A 2013 UNHCR-commissioned psychological assessment found that all the refugees and migrants on the UK military base in Cyprus, including children, suffered from serious psychological problems, including severe depression. A Danish NGO report in 2011 noted that persons living in asylum camps in Denmark for one year showed signs of serious mental problems due to anxiety about the future, untreated trauma, an institutionalized daily life and a lack of meaningful activities. The UK Refugee Council has illustrated why many rejected asylum seekers have an understandable fear of returning to their home countries. Many of them are women who have experienced sexual violence, female genital mutilation or underage marriage in their countries of origin. In the UK, to make ends meet, some of these women were turning to sex work, where they face additional risks of violence and health problems.

Many of these people end up being homeless or squatting in empty buildings without support from the state. The European Committee of Social Rights has emphasized that the minimum guarantees, under the European Social Charter, for the right to housing and emergency shelter apply to irregular migrants too. Shelter must be provided even when migrants have been requested to leave the country and even though they may not require long-term accommodation. The Committee has pointed out that the right to shelter is closely connected to the human dignity of every person, regardless of their residence status. It has also stressed that foreign nationals, whether residing lawfully or not in the country, are entitled to urgent medical assistance and such basic social assistance as is necessary to cope with an immediate state of need (accommodation, food, emergency care and clothing).

In recent years EU member states have attached great importance to effective and expeditious return of irregular migrants, including rejected asylum seekers, to their country of origin. While effective return of persons not in need of international protection is an important aspect of migration law and policies, human rights considerations need to be fully taken into account when implementing them.

Any type of return, whether voluntary or not, must be consistent with states’ obligations under international and European human rights law and in compliance with the principle of non-refoulement. It should also be conducted in keeping with the best interests of the child and with due process. Moreover, an important prerequisite to returns are fair and efficient asylum systems. Regrettably, some European countries have adopted legislative measures aimed at restricting access to asylum, such as the introduction of summary asylum procedures at the border, thereby undermining the right to asylum.

What should European states do?

In order to meet current migration challenges in an effective and human rights compliant way, European states should fully abide by their human rights obligations and work together towards common solutions based on inter-state solidarity. They should refrain from undermining existing human rights standards by adopting even more restrictive asylum and immigration laws.

All asylum claims need to be considered on their own merits in fair and efficient asylum procedures taking into account individual circumstances and up-to-date and relevant country of origin information. While waiting for their claims to be processed, asylum seekers need to have access to support and services which would provide them with a possibility to live in dignity.

As noted by ECRI in its General Policy Recommendation No. 16, the effective protection of the human rights of all persons, including migrants irregularly present, requires a strict separation of immigration control and enforcement activities from other state and private services. This requires the creation by states of effective measures (“firewalls”) to prevent, both in law and practice, state and private sector actors from effectively denying human rights to irregular migrants by clearly prohibiting the sharing of information about irregular migrants with the immigration authorities for purposes of immigration control and enforcement.

In all actions concerning children, the best interests of the child need to be states’ primary consideration. The Council of Europe Twenty Guidelines on Forced Return provide useful guidance in this context. Where return is impossible or particularly difficult authorities should authorise the persons concerned to stay in the country regularly in conditions which meet their basic needs and in full respect of their human rights. Particular attention should be given to ensuring the prohibition of inhuman and degrading treatment and the protection of the right to respect for private and family life. Migrants who are not removable should also be protected from being arrested and placed in administrative detention.

Moreover, they should be protected from labour exploitation and trafficking in human beings in full compliance with the Council of Europe Convention on Action against Trafficking in Human Beings.

Unaccompanied minors who are not granted asylum but cannot be returned should not automatically be returned when they turn 18; a thorough best-interest determination should be made before any return decision is issued.

Lastly, emphasis should be placed on establishing effective voluntary return programmes for persons not in need of international protection. Assisted voluntary return, reintegration programmes and safeguards in return and readmission procedures must be enhanced. Quality procedures, including Best Interest Determinations for unaccompanied children are required.