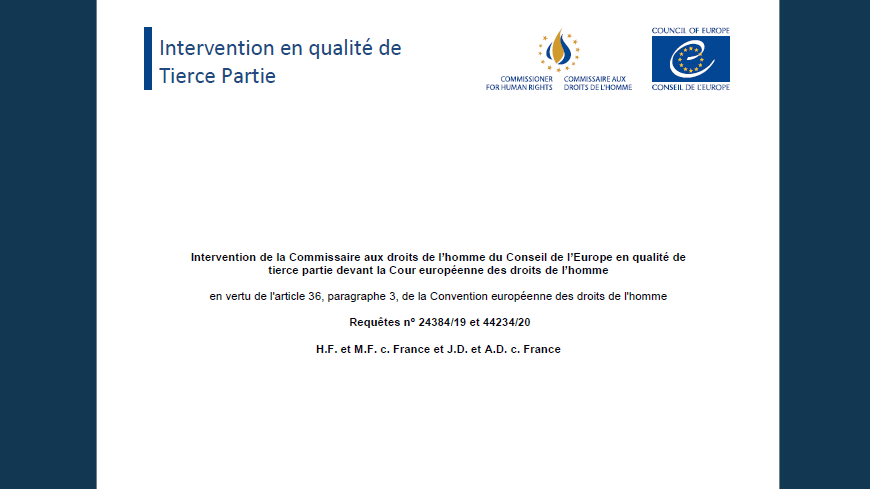 Today the Commissioner published her written observations submitted to the European Court of Human Rights as a third-party in the cases of H.F. and M.F. v. France and J.D. and A.D. v. France on the fate of European nationals held in camps in North-East Syria.

The Commissioner considers that nationals of the States Parties to the Convention being held in these camps fall within the jurisdiction of those states and that the prevailing health and security situation in the camps endangers the lives and physical and mental health of those detained there, especially children. Such situation cannot be compatible with the prohibition of torture or inhuman or degrading treatment laid down in Article 3 of the Convention. The Commissioner is of the view that the only way that States Parties can meet their obligation to take measures to prevent persons under their jurisdiction from being subjected to treatment contrary to Article 3 is to repatriate their nationals being held in these camps. Furthermore, she maintains that the refusal by certain States Parties to do so is such as to impede the effective exercise of these persons’ right to respect for private and family life.

In addition, the Commissioner states that the removal of all foreign children from the camps is an absolute and mandatory priority from the perspective of the rights which apply to all children pursuant to the UN Convention on the Rights of the Child and its protocols, and that in order to safeguard their best interests their mothers must be repatriated with them.

Lastly, the Commissioner considers that the repatriation of European nationals held in the camps in North-East Syria is essential in order to protect the rights of victims of terrorist acts and as a means of preventing terrorism.