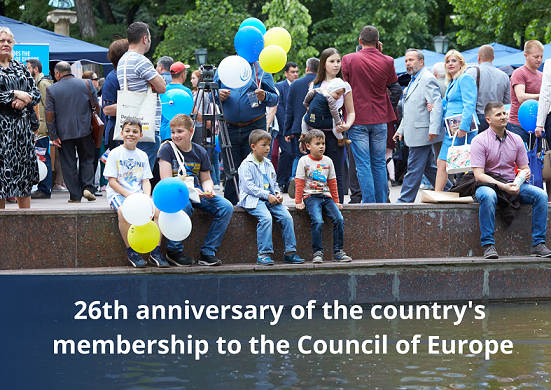 Chisinau, 13 July 2021 – Today marks 26 years since the Republic of Moldova became a full-fledged member of the Council of Europe on 13 July 1995 - the leading human rights organisation in Europe.

Since the Republic of Moldova accession, the Council of Europe is consistently supporting the development of the legislative and institutional framework of the country, which has ensured its transition from a totalitarian regime to a democratic system. Since its membership, Moldovan citizens have free access to European justice and their rights are protected by the most important Conventions ratified by the State.

Despite some restrictions imposed during the COVID-19 pandemic, the office team, together with the beneficiaries of our projects, have worked to ensure the smooth implementation of our common objectives in our many fields of work

Key achievements in the last year

The 10th anniversary of the Council of Europe Convention on preventing and combating violence against women and domestic violence, known as the Istanbul Convention was celebrated via an online event and awareness raising campaign bringing together different perspectives and experiences from a variety of actors engaged in combating violence against women and domestic violence in the Republic of Moldova. Public institutions, civil society, social workers, multidisciplinary teams, police, prosecutors, judges, academia, students shared their experience in the field and made their voices heard through an online event “Voices of practitioners working in the area of violence against women”, organized in the framework of the German Presidency of the Committee of Ministers of the Council of Europe.

The quality of health care provided in prison was enhanced due to improved material conditions of all 16 medical units in prisons and the Prison Hospital thanks to the donation of needed medical equipment.

Electoral education became user-friendlier and more accessible in the Republic of Moldova through improved capacities of the Centre for Continuous Electoral Trainings to reach trainees via the re-engineered E-learning platform and newly developed electronic Register of trained and certified experts.

Through co-operation projects in the field of combating discrimination, hate speech and hate crimes, the Council of Europe has reinforced the capacities of law enforcement and the judiciary, as well as of the Equality Council and the People’s Advocate to provide remedies to these harms.

By piloting the democratic school governance methodological guide, the Moldovan schoolchildren can develop competences, which will enable them to participate effectively in a culture of democracy.

The Council of Europe activities in the Republic of Moldova also foresee the protection of the rights of all children in various environments: at school, in public spaces, in sport facilities, in their families etc. Awareness of children, parents and general public on child sexual abuse was raised through several events, radio and TV activities, which increased the calls from children to the number of the national hotline counselling.

In supporting the public service broadcaster, Teleradio-Moldova and Telefilm-Chisinau, three high-quality, long documentaries tackling crucial social and human rights issues in the country have been produced. One of the three documentaries “Our Eve” has been accepted to and will have its international premier in the summer of 2021 at one of the most prestigious film festivals in Europe, TIFF 20th Edition.