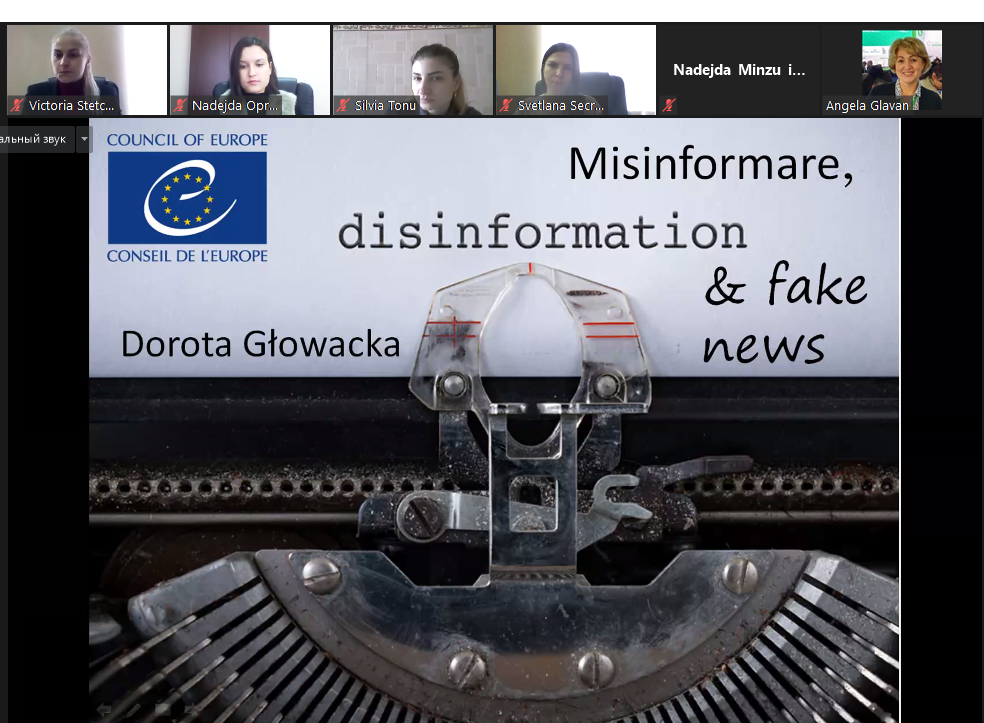 Throughout the 18th and 19th of March, the Council of Europe Project “Promoting European standards in the audiovisual regulation of the Republic of Moldova” has organized a series of workshops for the staff of the Audiovisual Council, the main audiovisual regulatory authority in Moldova, on the increasing phenomenon of disinformation, misinformation and malinformation.

Acknowledging the rising impact of information disorder within societies and on media, the workshops’ overarching aim was to equip the key staff of the Audiovisual Council (media monitoring department) with a set of skills, tools and resources to spot the different types of false news, as well as garner their understanding of the legal opportunities of the Audiovisual Council to counter the spread of disinformation.

In this respect, the trainings involved two media experts and their expertise offered participants a new perspective on the continually evolving national and international perspective and key ways to align it to the Moldovan context. The discussion platform also led to engaging debates about the current challenges faced by the Moldovan regulatory authority in identifying false news and undertaking the needed steps to counter disinformation.

By exploring examples from EU countries’ practices, the workshops facilitated discussions about the role of the Audiovisual Council and state institutions in countering information disorder, especially in sensitive contexts such as Covid-19 pandemic and the elections. Additionally, discussions were encouraged on a broader scale – concerning the importance of media literacy among citizens and critical thinking to diminish the rising impact of disinformation. The participants from the Media Regulatory Authority have equally emphasised the essential role played by quality journalism in the context of disinformation, and the needed steps to support it, rebuild trust in media and also enhancing journalists’ skills in countering disinformation.

The event was organised within the framework of the Project “Promoting European standards in the audio-visual regulation of the Republic of Moldova”, running from March 2020 – December 2021.