Speak peace, be the change! 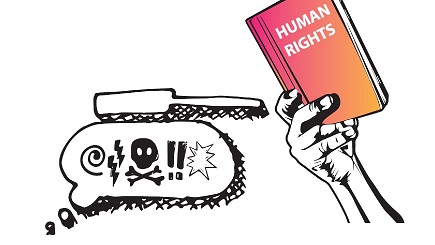 A new publication on hate speech, produced within co-operation programmes of the European Union and the Council of Europe, is now available online.

"Speak peace! Hate speech is not an option!" explores the concepts of hate speech, its manifestations, its risks for human rights and democracies. This booklet was developed for any person, civil society organisations and others who feel the need to understand the phenomenon of hate speech better and wish to do something to combat hate speech, taking a stance against it in diverse societies they live in. It provides explanations about hate speech as well as proposals for actions to prevent and fight hate speech.

Currently available in English, the publication is being translated in other languages, to accompany the campaigns aimed at combating hate speech and other activities of the organisation in the field, including when supporting youth mobilisation and civil society activism. "Speak peace! Hate speech is not an option" is now available in an e-version on the Horizontal Facility, Partnership for Good Governance and Council of Europe Anti-discrimination website and will be broadly shared online and presented at virtual events organised during the pandemic. Printed copies will be available as of spring in the field offices of the Council of Europe and of the European Union. Versions in Albanian, Armenian, Bosnian, Georgian, Macedonian, Montenegrin, Romanian, Russian, Serbian and Ukrainian will be published once available.

Speak peace ! Hate speech is not an option

This brochure was developed within joint programmes of the European Union and the Council of Europe, the Partnership for Good Governance(PGG) and the Horizontal Facility for the Western Balkans and Turkey (HF); in particular the action “Promotion of diversity and equality in the Western Balkans” (HF) and the project “Strengthening access to justice through non-judicial redress mechanisms for victims of discrimination, hate speech and hate crimes in the Eastern Partnership”