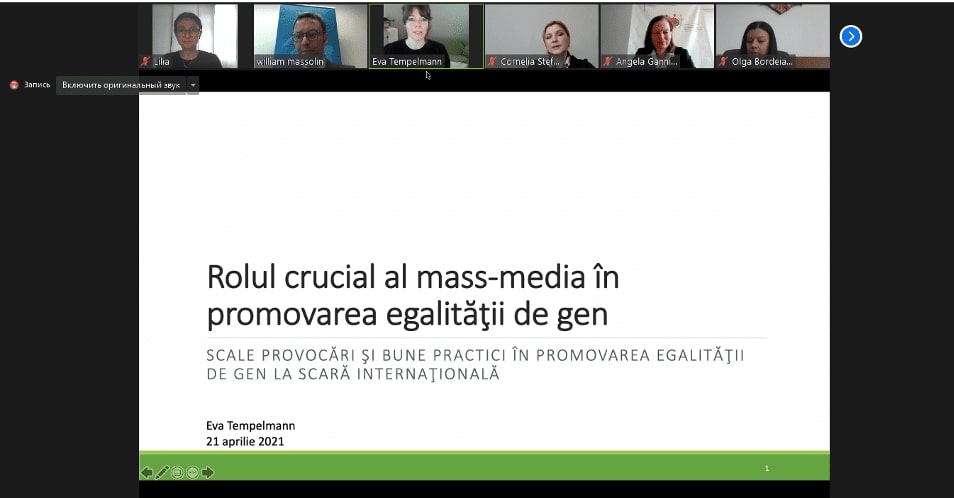 On 21st of April, over 30 journalists and media professionals attended an online workshop on the crucial role of mass-media in advancing and achieving gender equality. The event was organised with the support of Council of Europe Office in Chisinau jointly with the German Embassy in the Republic of Moldova, the Deutsche Welle Akademie and the partners from “Teleradio-Moldova” in the framework of the German Presidency of the Council of Europe Committee of Ministers and to mark the 10th anniversary of Council of Europe Convention on preventing and combating violence against women and domestic violence.

In her opening speech, Olga Bordeianu, General Director of Teleradio-Moldova, highlighted that “advancing gender equality is a must in our current society, and mass-media especially holds an imposing role in this respect. I would like to mention that the Public Company Teleradio-Moldova is a promoter of gender equality through our content and today’s event comes to reiterate our commitment. I am certain that the workshop organised today will have a significant impact in strengthening the company's and our journalists’ efforts in accelerating the promotion of gender equality in the public space.”

Angela Ganninger, German Ambassador to the Republic of Moldova also pointed out that “One of our priorities within the German presidency of the Committee of Ministers at the Council of Europe is upholding human rights, democracy and the rule of law, and gender equality is an important element in all of these fields. We have achieved progress over the past decades in terms of gender equality, but that does not mean that full equality has been achieved or that we should become complacent about the state of affairs at this moment. This is why the message of this workshop is to learn from each other, with each other. Let’s benefit from our joint experience and backgrounds.”

William Massolin, the Head of the Council of Europe Office in Chisinau, in his welcome speech mentioned that “we strongly believe in the transformative role media can play in achieving gender equality in societies and promoting gender equality remains a priority of the Council of Europe, a commitment reinforced in the Action Plan 2021-2024 for Moldova. Gender mainstreaming, based on European standards and Council of Europe recommendations, and joining forces with various stakeholders and partners, will help to better address the needs of people living in Moldova without discrimination and to enhance the quality and effectiveness of our interventions.”

Eva Tempelmann, international gender expert offered participants the opportunity to entrench their understanding of the critical role which media and a gender sensitive approach to media content can play in fostering gender equality and overcoming some of the overarching challenges which women in media face in Europe. Moreover, Mirjam Gehrke, editor of Germany’s international broadcaster Deutsche Welle presented 50:50 the Equality Project, which aims to increase representation in the content created by Deutsche Welle.

Additionally, the session carried out by national expert, Loretta Handrabura facilitated the sharing of good practices in increasing the participation and access of women to expression and decision-making in and through the media and to promote a balanced and non-stereotyped portrayal of women in the media, as well as the role of women in news coverage and within media institutions.

The workshop was organised within the framework of Council of Europe Project “Promoting European standards in the audiovisual regulation of the Republic of Moldova”, March 2020 – December 2021.