Launching of the video spot on child sexual abuse for doctors 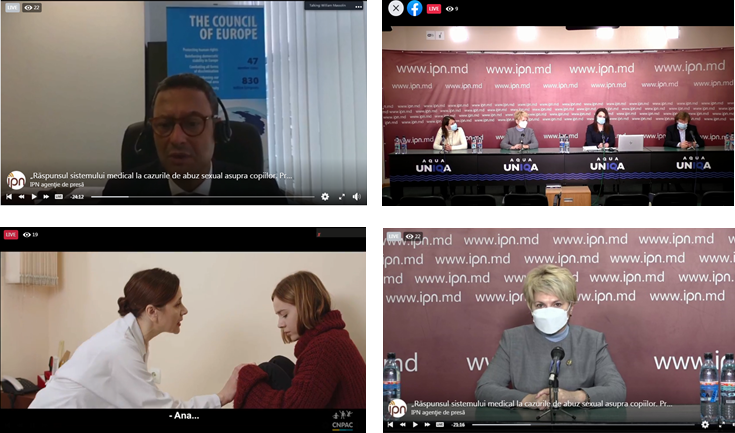 The video spot "The response of the medical system to child sexual abuse" was launched today during a press conference by the National Centre for Child Abuse Prevention, within the grant agreement with the Council of Europe project Combating violence against children in the Republic of Moldova.

The aim of the video spot is to raise awareness on child sexual abuse prevention, identification and reporting among medical workers. The video will be promoted and used as a methodological tool during online trainings to be delivered to medical workers by the National Centre for Child Abuse Prevention in the following period.

The online launching event was attended by several relevant stakeholders, including the representative of the Paediatric Society of the Republic of Moldova, as well as partners and the media.

William Massolin, Head of the Council of Europe Office in Chisinau mentioned that “Doctors, in particular family physicians and paediatricians have an ethical and legal obligation to report suspected child sexual abuse cases. Thus, physicians must understand the problem and identify the signs and symptoms of such cases. Physicians should also become familiar with available resources and services, to rely on them for guidance and assistance”.

Daniela Simboteanu, President of the National Centre for Child Abuse Prevention underlined that “Combating the phenomenon of child sexual abuse must be a joint effort of professionals working with and for children”.

This activity results from the obligation imposed by Article 5 of the Lanzarote Convention on Member States to train professionals working with children and is part of the Project’s imediat outcome 1 “Increased awareness on child sexual exploitation/abuse and the rights of the child in the digital environment”.