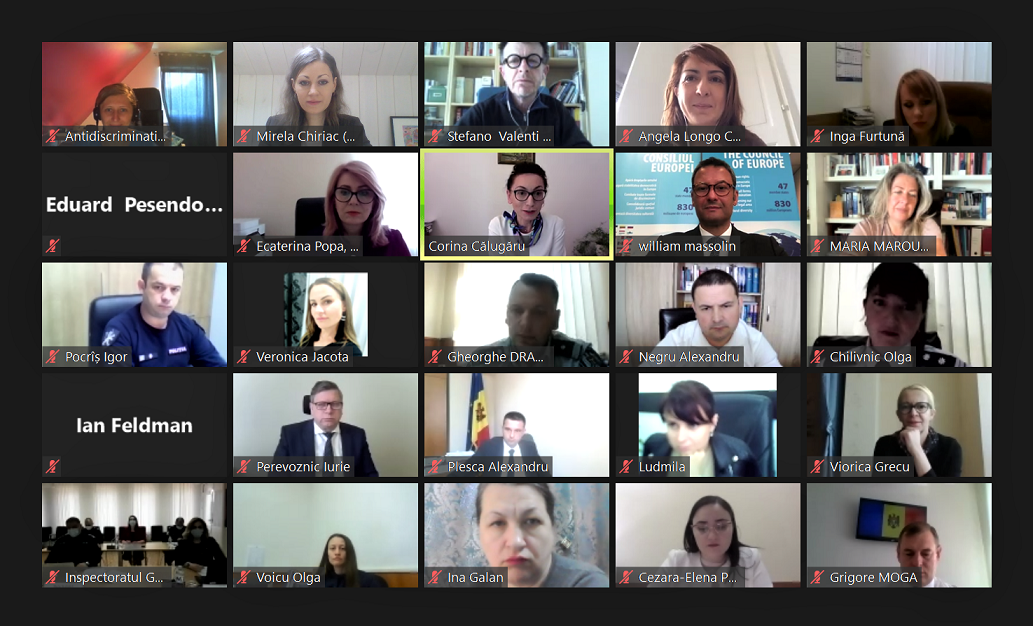 On 03 June 2021, an online round table on enhancing equality and non-discrimination by training law enforcement and the judiciary on hate crime was organised, following ECRI’s conclusions on the implementation of its priority recommendations for the Republic of Moldova.

The main purpose of the event was to discuss with relevant national stakeholders the latest ECRI Conclusions on the Republic of Moldova. In addition, the roundtable focused on successful practices on training of law enforcement officials and judiciary on hate crime and future steps on combating hate crime and discrimination in the Republic of Moldova.

William MASSOLIN, Head of the Council of Europe office in Chisinau: We hope that this round table will re-confirm the commitment of national authorities to continue their training programmes, to ensure that law enforcements officials and the judiciary become the trusted people to refer to by victims of hate crime and also hate speech. We believe that a longer-term support will produce even increased results and, as Council of Europe, we are ready to continue our co-operation support, also in the framework of the new Council of Europe Action Plan for the Republic of Moldova, which includes among its priorities combating discrimination, hate speech and hate crimes.

Ambassador Corina CALUGARU, Permanent Representative of the Republic of Moldova to the Council of Europe: today’s event re-affirms the importance of synergetic efforts of all the actors involved in combatting discrimination, hate speech and hate crime to continue their training, but also to implement other relevant measures and activities, to ensure the highest impact on the observance of human rights, with positive effects for the entire society.

Maria Daniella MAROUDA, ECRI Chair: ECRI as independent human rights monitoring body of the Council of Europe in the field of combatting racism and intolerance, monitors extensively the prevalent issues and persistent shortcomings in the field of human rights and anti-discrimination. Our last conclusions for the Republic of Moldova, aim to highlight the essential tools in tackling hate crime and hate speech, in order to increase the trust in law enforcement bodies.

After the presentation on ECRI’s conclusions, the national institutions, such as the Ministry of Justice, the Ministry of Internal Affairs and the Office of the Prosecutor General had the possibility to comment on the ECRI conclusions and make statements about combating hate crime and discrimination. Also, good practices on training for law enforcement and the judiciary were presented by the General Police Inspectorate, the National Institute of Justice and the Superior Council of Prosecutors.

In conclusion of the event, future directions of work on combating hate crime and discrimination in the Republic of Moldova were identified by the participant institutions, highlighting the importance of synergies and common efforts to ensure that enforcements officials and the judiciary become the trusted people for the victims of hate crime and hate speech.