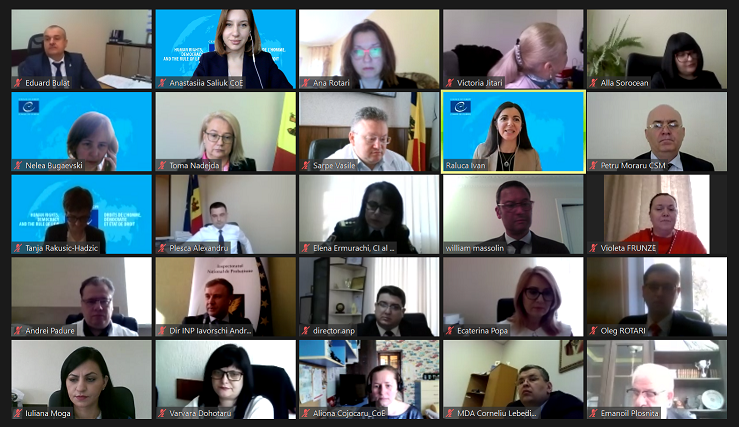 Both Projects build on the achievements of the previous Council of Europe Action Plans for the Republic of Moldova, notably, results of projects implemented between 2015 and 2020, namely, the Programme “Promoting a human rights compliant criminal justice system in the Republic of Moldova” (2018 – 2021, “HRCCJ Programme”) and the Project “Support of the Criminal Justice Reforms in the Republic of Moldova” (2015 – 2018). In addition, the Projects are focused on further consolidating the achievements of the Norwegian Mission of Rule of Law Advisers to Moldova (NORLAM) activities in country completed in June 2017. The two new Projects launched today represent the continuation of the 36 months’ HRCCJ Programme.

In his welcoming speech, Mr William Massolin, Head of Council of Europe Office in Chisinau underlined that “The necessity to accelerate the reforms in the criminal justice field in the Republic of Moldova is supported by the findings and recommendations of the Council of Europe monitoring statutory and treaty bodies, as well as by the shortcomings revealed by the European Court on Human Rights”.

SPPRH Project aims at supporting the enhancement of the prison management practices, the improvement of the quality of the provision of health care to inmates (including mental health care), supporting the probation in raising its profile, promoting the value of community sanctions and measures among all actors of the criminal justice system and strengthening of treatment programmes and protocols for patients in psychiatric establishments (including forensic patients).

SHRCCJ Project is focused on pre-trial detention, criminal sentencing and enhancing the effectiveness of the mechanisms of control and monitoring over prison conditions (including the mechanisms available to the Ombudsperson Institution and the National Preventive Mechanism) and thus contributing to reducing overcrowding in prison and encouraging the use of community sanctions and measures. Its key objective is to make the criminal justice system in Moldova more in line with the human rights standards.

The two Projects are closely interlinked and together form a comprehensive approach towards solving key criminal justice issues in Moldova.

In this light, Mr Alexandru Pleșca, State Secretary, Ministry of Justice of the Republic of Moldova mentioned that “For overpassing the current precarious situation in the justice system, further intervention and support is still needed, so the Ministry welcomes further implementation of development working plans, launching new working groups and the development and implementation of strategic documents and tools.”

Both Projects will contribute to further strengthening the criminal justice system in the country, which is also grounded in the analysis of the findings and recommendations of the Council of Europe monitoring bodies, European Committee for the Prevention of Torture (CPT), as well as by judgements of the European Court of Human Rights issued with respect to the Republic of Moldova. In line with the CPT’s latest recommendations, SPPRH Project will integrate for the first time a component on treatment of patients in psychiatric establishments, including the forensic patients.

Ms Tatiana Zatic, State Secretary, Ministry of Health, Labour and Social Protection of the Republic of Moldova remarked that “The paramount importance of the project resides in its target set at addressing the treatment of patients in closed institutions and at the access of detainees to qualitative medical assistance in penitentiaries. This is going to have a sustainable beneficial effect on the general wellbeing of this category of patients – starting with their detention, continuing with their release and further reintegration in society.”

The Launching event was followed by the 1st Steering Committee (SC) meetings of both Projects which brought together representatives of Projects’ beneficiaries, partner governmental institutions and representatives of the Council of Europe. The meetings were marked by a fruitful exchange on the cooperation between the CoE and the Republic of Moldova in the field of human rights and the rule of law and topical presentation of project intervention areas, expected results and outputs. In this context, the overall Work Plans of the Projects and operational Work Plans for 2021 were discussed and endorsed by the SC members.

According to Mr Cornel Lebedinschi, State Secretary of the Ministry of Internal Affairs of the Republic of Moldova, “The Projects shall support the enhancement of the capacities of criminal prosecution and investigation officers within the police and prosecution offices and the Projects’ work plan shall add value to each of the beneficiary involved in the Projects”.

The Launching event and the SC meetings were the occasion for the Moldovan authorities and the beneficiaries of the Projects to reflect together with the Council of Europe on previous joint achievements in the field of criminal justice reforms in the Republic of Moldova, their impact, as well as the continued need for further efforts and steps to be taken in this direction.