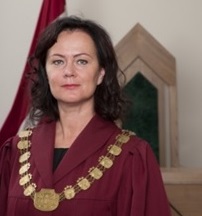 Since 2004 also lecturer in Latvian Judicial Training Centre providing trainings for judiciary, prosecutors and lawyers. From 2002 to 2003 lecturer in Turiba Graduate School of Business. Is involved as an expert in the number of the working groups leaded by the Ministry of Justice with the view to develop legislation, permanently involved in the development of Civil Procedure Law.