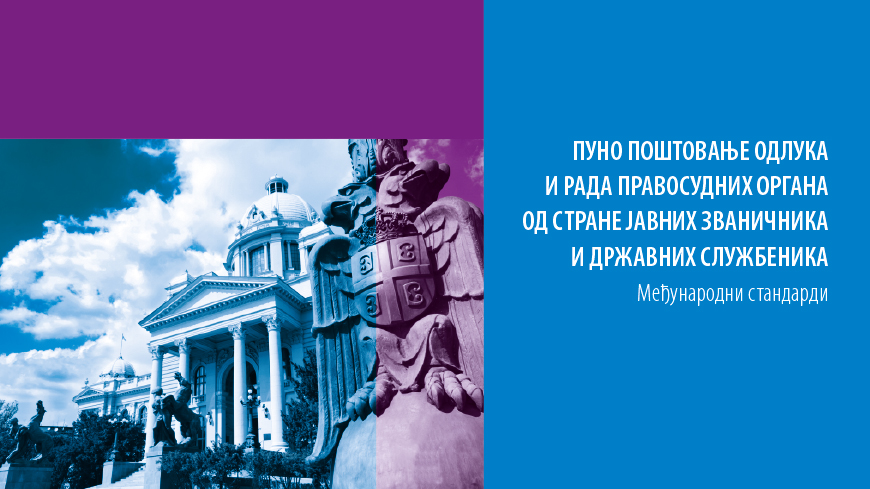 The Ministry of Justice of the Republic of Serbia intensified their efforts to emphasise the need for full respect of judicial decisions and refraining from public comments on the work of courts by public officials and politicians. To that end, at the request of the Ministry, the joint European Union and Council of Europe action “Strengthening independence and accountability of the judiciary” produced a brochure entitled “Full respect of decisions and the work of the judiciary by public officials and civil servants – international standards“.

Maja Popović, Minister of Justice of the Republic of Serbia, stressed in her foreword to the brochure that “preservation of public trust in the judiciary and safeguarding of its independence from other branches of government are essential elements of the rule of law and the separation of powers. Court proceedings must be guaranteed protection from political pressure, along with the clear need for open discussions on issues of public interest that concern the work of the judiciary”.

The publishing of the brochure is foreseen by the revised Action Plan for Chapter 23. Copies will be distributed to multiple stakeholders, including members of the parliament, while the brochure will be promoted within the framework of the quarterly joint meetings between representatives of ethics committees of the High Judicial Council, State Prosecutorial Council, National Assembly and the Government of the Republic of Serbia in order to raise awareness of public officials and politicians for full respect of judicial decisions and work of courts and public prosecutor’s offices.

The action “Strengthening independence and accountability of the judiciary” is part of the “Horizontal Facility for the Western Balkans and Turkey 2019 - 2022”, the joint European Union and the Council of Europe programme, which aims at assisting beneficiaries in the Western Balkans region and Turkey to comply with the Council of Europe standards and European Union acquis in the framework of the enlargement process, where relevant.