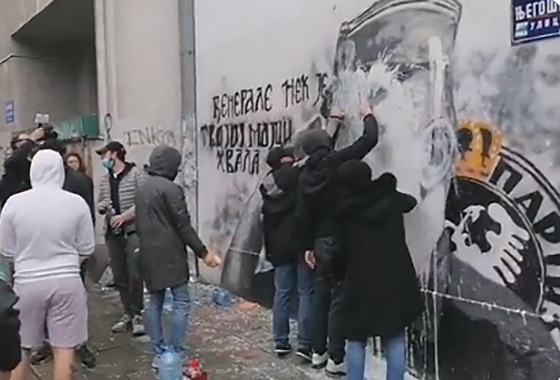 Piero Fassino (Italy, SOC) and Ian Liddell-Grainger (United Kingdom, EC/DA), PACE rapporteurs for the monitoring of Serbia, have urged the Serbian authorities to take unequivocal action against the glorification of convicted war criminals and to remove, without delay, a mural in Belgrade glorifying Ratko Mladic, convicted of war crimes and crimes against humanity.

"We are dismayed at the failure of the authorities - despite a decision of the communal police - to remove this illegally installed mural and that the former Vaclav Havel prize winner, the Youth Initiative for Human Rights (YIHR), was banned from holding a demonstration against this mural on 9 November 2021, with the Ministry of Interior citing 'security reasons'. We were then informed that the police were sent to protect the mural and prevent access by possible protesters from both sides. Two YIHR activists were arrested, the association's offices were attacked, a banner of peaceful demonstrators calling for the Srebrenica genocide to be remembered was burned, and nationalist extremists organised counter-demonstrations”, the rapporteurs said.

"These events remind us of the need to fight unambiguously against the glorification of convicted war criminals. Such acts undermine regional cooperation and hinder the process of European integration to which Serbia aspires: a democratic society cannot live in denial of war crimes and in the culture of hate and impunity. We therefore call on the Serbian authorities to demonstrate, through strong actions, their willingness to fight firmly against the glorification of war criminals and to erase, without further delay, the frescoes glorifying war criminals", Mr Fassino and Mr Liddell-Grainger said.

In 2019, the Parliamentary Assembly had awarded the YIHR its Vaclav Havel Human Rights Prize in recognition of the association's work to build bridges between young people in the Balkans, from different ethnic groups, regions and countries, and to prevent the resurgence of ethnic conflict in the region.