Liechtenstein joined the Council of Europe on 23 November 1978.

Action of the Council of Europe in Liechtenstein

The Group of States against Corruption (GRECO) monitors member states' compliance with the Council of Europe anti-corruption standards with the objective to improve the capacity of its members to fight corruption. Liechtenstein joined GRECO in 2010. 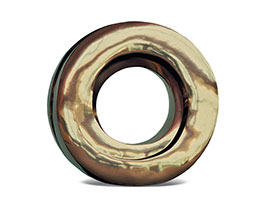 Copper sculpture
Donated by Liechtenstein in 1976

Liechtenstein in the Council of Europe

Liechtenstein is represented in the Parliamentary Assembly by a delegation of 2 representatives and 2 substitutes.

Liechtenstein is represented in the Congress by a delegation of 2 representatives and 2 substitutes.

- Judge to the European Court of Human Rights: Carlo Ranzoni
- Applications allocated to a decision body(*) in 2021: 8
- Judgments in 2021: 1 non-violation

Treaties ratified and signed by Liechtenstein