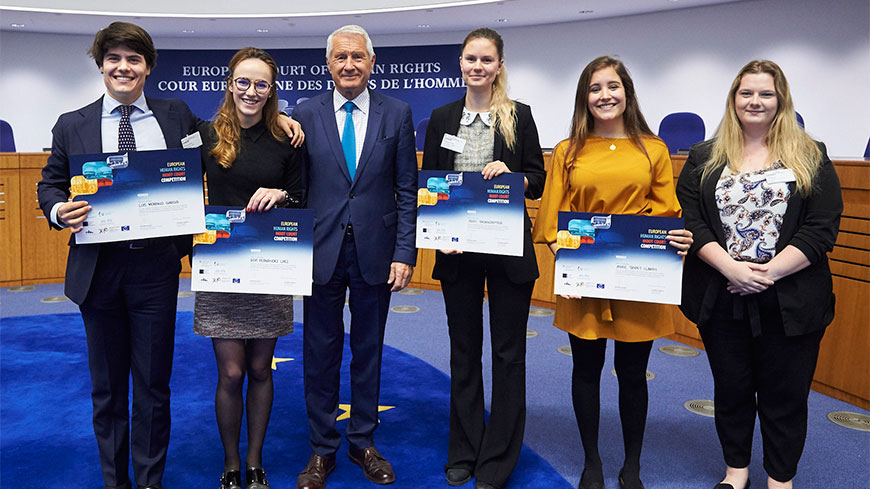 Students from IE University (Spain) were declared winners of the sixth edition of the European Moot Court Competition in English on the European Convention on Human Rights, after beating a team from the King’s College London in the final round. The team from City University London, placed third.

The prize for Best Orator of the Finals was awarded to George Collecott, from the King’s College London.

The prize for Best Respondent Written Submission was given to the teams from the Democritus University of Thrace (Greece), the University of Grenoble Alpes (France) and the Ukrainian Catholic University.

The prize for Best Applicant Written Submission was awarded to the University of Grenoble Alpes (France).

The final round took place at the European Court of Human Rights in Strasbourg on Friday 4 May and its jury was made up of prominent figures, including judges of the Court and senior Council of Europe officials.

Nineteen university teams from fourteen countries (Albania, Bulgaria, Croatia, the Czech Republic, France, Germany, Greece, Romania, Russia, Spain, Sweden, Turkey, Ukraine and the United Kingdom) have competed in a fictive case regarding the right to the freedom of religion. The winning team is awarded a traineeship at the Court.

The Moot Court Competition aims at giving law students, who are future lawyers or judges, practical experience on the European Convention on Human Rights and its implementation.

The competition is organised by the European Law Students Association (ELSA) with the support of the Council of Europe. ELSA is an independent and non-profit organisation representing 54 000 students, located in 300 universities in 44 European countries.