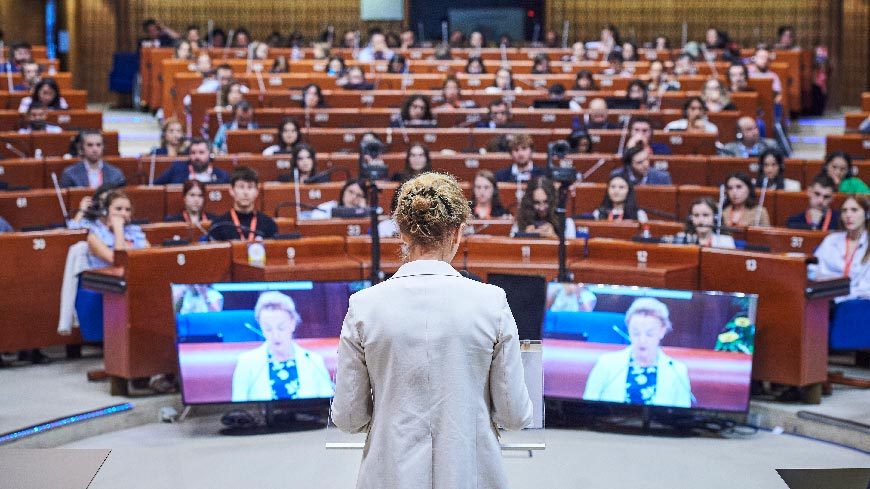 Opening the major event in Strasbourg, Youth Action Week which marks the 50th anniversary of the Council of Europe’s youth sector, Council of Europe Secretary General Marija Pejčinović Burić called on young people to remain engaged in revitalising democracy and in addressing the emerging threats to human rights, democracy and the rule of law, including in the context of the ongoing military aggression of Russia against Ukraine.

“This week will see the emergence of ideas and examples that will be a source of inspiration, both in the Council of Europe and in all the countries of our continent,” said Marija Pejčinović Burić to some 450 participants of the Youth Action Week, noting that their recommendations proposed as a result of the week “will be heard, as they come at the important moment, marked by the return of the populism and nationalism on our continent”.

“They threaten to silence your voice,” she warned, stressing that the most extreme example of such tendencies is the brutal, illegal and ongoing aggression of Russia against Ukraine. “The consequences are shocking: rape, murder and torture, so many crimes that we had hoped never to see again in Europe,” the Secretary General said. “Many young people remained in the country and witnessed these horrors, which will stay with them forever. Others have fled their homes and communities in search of safety in neighbouring countries. Our thoughts are with them all.” The Secretary General added that several young Ukrainian activists are participating in the Youth Action Week and mentioned other ways the Council of Europe works with Ukrainian youth organisations and authorities, and adjusts its activities to the evolving situation.

For half a century, the Council of Europe has been leading the development of participative and inclusive youth policies, youth work and youth research in Europe. Much has been done; the importance of these achievements for Europe has been reiterated by the Secretary General, as well as by other speakers at the opening session: Ambassador Breifne O’Reilly, Permanent Representative of Ireland and Chairperson of the Committee of Ministers; Spyros Papadatos, President of the Advisory Council on Youth and Véronique Bertholle, Deputy Mayor of the City of Strasbourg. Actively promoting participatory democracy and engagement with young people is one of the priorities of the Irish Presidency, which supports the event.

Among the milestones of the Council of Europe’s work with and for youth since 1972 are the establishment of two European Youth Centres, in Strasbourg and Budapest; setting up of the European Youth Foundation to provide financial and educational support to young people’s projects; the creation of a unique co-management system bringing together governments, Council of Europe and young people to make sure the voice of young people are taken into account in policy-making at the national and international levels. The campaigns “All Different – All Equal” and the No Hate Speech Campaign were initiated by young people and reached out to them in all member states. The Council of Europe will continue its work with young people, governments and other actors in its member states, under the Youth sector strategy 2030, the Committee of Ministers Recommendation on protecting youth civil society and young people, and in other frameworks, stressed the speakers.

The Youth Action Week is a flagship event of the youth campaign to revitalise democracy “Democracy Here, Democracy Now”. Throughout the week, young people are debating such urgent issues as the right to vote, non-discrimination, gender equality, the role of education in building democracy, the threat of hate speech, minority youth, “disruptive” youth participation, digital citizenship, as well as peace and the resilience in the face of armed conflict.