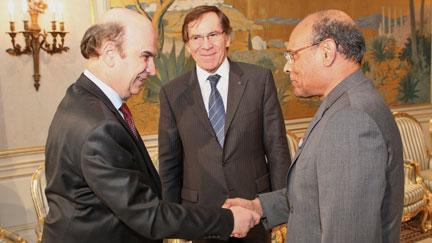 Strasbourg, 30.10.2012 – At the close of their official visit to Tunisia, Edmond Panariti, Chair of the Committee of Ministers of the Council of Europe and Minister for Foreign Affairs of Albania, and Jean-Claude Mignon, President of the Council's Parliamentary Assembly – accompanied by Venice Commission President Gianni Buquicchio – called on Tunisian authorities to push ahead with on-going constitutional reform "so as firmly to establish the foundations of a democratic and pluralistic society in which the rights and freedoms of all individuals are respected." They also called for setting up, through the Constitution, "independent authorities to deal with the essential issues of judicial and media independence".

Mr Panariti and Mr Mignon welcomed the fact that civil society will be broadly consulted in the near future over the draft Constitution. "We hope that this will enable everyone to make their voices heard, especially human rights defenders". The Council of Europe, they stressed, will continue to provide expertise through its various tools not only to help finalise the draft Constitution, but also in the important processes which will follow its adoption. "In that vein, we hope that the agreement to establish a Council of Europe office in Tunisia will be concluded in the near future", they added. (more...)