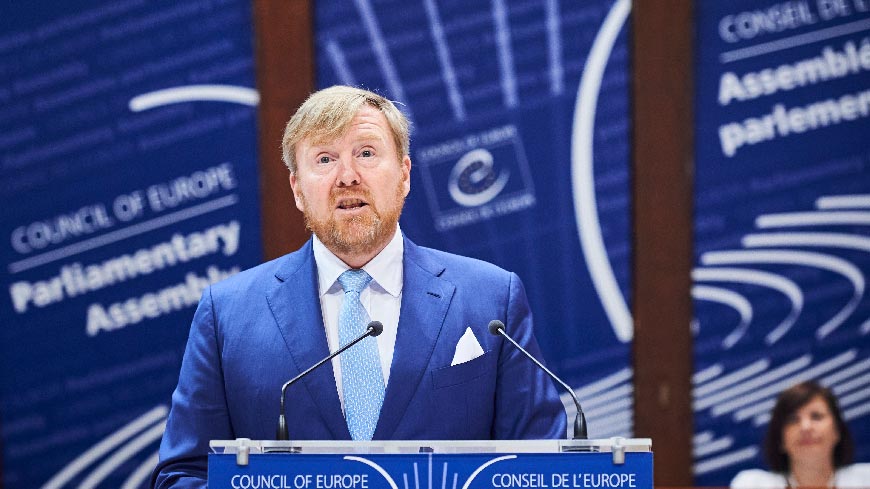 “Brute force and misuse of power can never be allowed to have the last word. That conviction is what inspired the Kingdom of the Netherlands to join with nine other countries in 1949 to establish the Council of Europe”, highlighted His Majesty King Willem-Alexander while addressing PACE. ‘It must be all for all’: the King of The Netherlands quoted Winston Churchill in The Hague in 1948, calling for unity among member states.

“For almost three-quarters of a century, the Council of Europe has shown that we do not need to be held hostage by the bitterness and pain of the past. That there is an alternative to violence and tyranny. That it is possible to live together in peace and liberty by ensuring that we always remain in dialogue”, added the Dutch King.

A clear reference to the Russian invasion to Ukraine was at the heart of his speech: “we Europeans do not want to see the clock turned back a century. We do not want to go back to a time in which ‘might was right’, or to an era of extreme nationalism, hateful propaganda, and terror. Those ghosts of the past must not be allowed to return. It would be a historic mistake to believe that, in 2022, Europe can be driven apart by force or that violence can be used to deprive a people of their freedom”, he said.

In his visit to Strasbourg, His Majesty the King was accompanied by the Minister for Legal Protection Franc Weerwind. Meetings with President of the Parliamentary Assembly Tiny Kox, Secretary General Marija Pejčinović Burić, President of the Congress of Local and Regional Authorities Leendert Verbeek, Commissioner for Human Rights, Dunja Mijatović, European Court of Human Rights’ President Robert Spano and Dutch judge Jolien Schukking were also on the King’s agenda.

Finally, the King met with representatives of the Platform to promote the protection of journalism and safety of journalists and he paid a visit to European Youth Centre (EYC).

Speech by His Majesty King Willem-Alexander